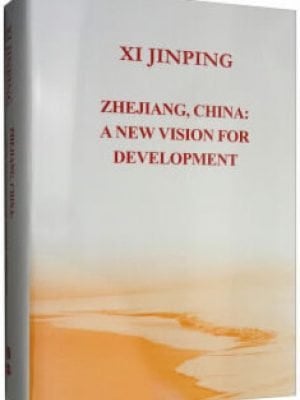 You are viewing: Zhejiang, China: A New Vision for Development

Xi Jinping is the principal founder of the Thought on Social-ism with Chinese Characteristics for a New Era. While working in Zhejiang Province on the eastern coast of China, he developed farsighted ideas on subjects such as general reform, innovative,coordinated, green, open and inclusive development, the rule of law, Cl-unese culture, social stability, and Party building, and put many of these ideas to the test. He also formulated some major policies like the “”Eight Strengths and Eight Measures Strategy.””All these proved to be effective theoretical and practical innova-tions in socialism with Chinese characteristics at the provincial level. This book is a collection of the 232 essays written by Xi Jinping for Zbejiang Daity’s column “”Zhejiang, China:A New Vision for Development”” between February 2003 and March 2007. Unadorned, insightful and clear, these articles reflect his deliberations on how to apply the Central Committee’s deci-sions and plans to Zhejiang’s practical context, and his ideas on promoting balanced social and economic development in Zhejiang.They are masterpieces in the use of Marxist stances, opinions and methods to observe, analyze and solve problems. The Chinese edition of the book, first published in August 2007 and reprinted in November 2013, has aroused great inter-est among readers. To help the international community to know more about Xijinping and better understand China and the CPC in the current age, the Foreign Languages Press and Zhejiang People’s Publishing House are jointly pubLishing multiple language editions of the book. For the convenience of international read-ers, some articles in the foreign language editions have been appended with useful endnotes.​